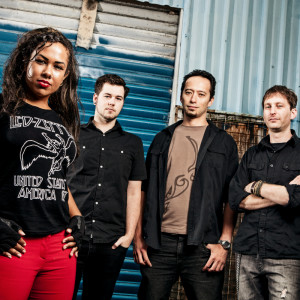 Static Era is an Auckland-based rock band (think Evanescence meets Stone Sour) that formed in late 2010 and features a stellar lineup of musicians. Since starting out, they have:

Vocalist Emma G is a New Zealander of the Year Local Hero award recipient, honoured in 2012 for inspiring others through her music. Despite living with a health condition that has challenged her through twenty three surgeries, including ten brain surgeries, she established a successful singing career at a young age and placed top ten in the Inaugural Play It Strange songwriting competition in 2004. Emma G also teaches tertiary level music and was a vocal coach for eight years.

Rounding out the lineup is bassist Victor Pesch, who has performed in numerous punk/metal bands in his hometown of Hamilton. He brings his solid rhythm and experience to help complete the Static Era sound.

Static Era originally formed as a backing band for Emma G’s solo shows in late 2010. Having recently moved from Hamilton to Auckland, Emma G met Chris and Dave at an open mic night where after some fast talking, they agreed to work together. The band started writing songs together and the sound evolved from Emma’s acoustic singer/songwriter style to a heavier rock sound. With the new sound came a more focused direction and the name change to Static Era in 2012.

The Rock FM featured So Sore on Off The Record in April 2012 and the debut EP The Start was released shortly after in May 2012.

Fire Away, the first single from the follow-up EP Dare To Fail, featured on NZ On Air Kiwi Disc 163 in September 2013.

Dare To Fail was released in October 2013 supported by a north island tour.

Static Era’s latest single Nobody’s Toy was produced by Dave Rhodes and mastered at Sterling Sound in New York City. It’s the second release from Dare To Fail, featured on the NZ On Air Kiwi Hit Disc 167, followed by another north island in February 2014.