You are here: Home / Blog / About Static Era – our new name 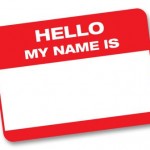